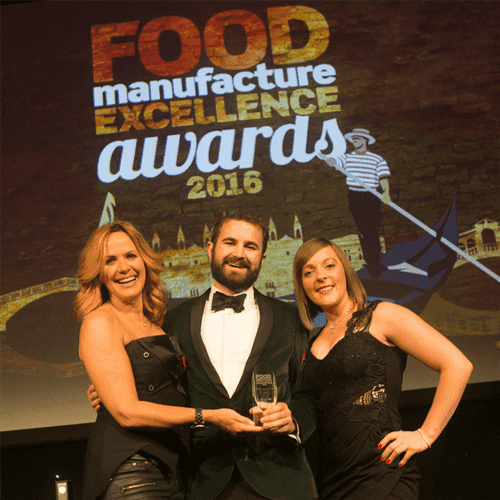 We are delighted to announce that last night we were named Best Food Company in the UK ahead of some of the biggest companies in the UK and Ireland at the Food Manufacture Excellence Awards in London.

The awards recognise outstanding performance and innovation in manufacturing businesses throughout the UK and we picked up not only the overall prize but also the award for Chilled and Fresh Produce Manufacturing Company of the Year. We beat huge competition for the awards including Coca-Cola, Moy Park, Weetabix and Kelloggs.

The judging panel, including some of the biggest names in the business, awarded us for excellence in innovation as well as our family ethos and values that set us apart. We are now the biggest brand in the Chilled Side Dish category of the supermarket in the UK and Ireland and increased sales in GB by over 38% last year.

Director Jack Hamilton received the two awards at the glitzy Hilton Park Lane hotel last night in Mayfair, London. “Even to be named among big companies such as Coca-Cola means a huge amount to the team but to take the big prize back to the farm in Comber is unbelievable.”

“Having only started out twelve years ago as a small farm diversification supplying to local stores in Killyleagh and Killinchy we are astonished to have won Company of the Year. It means so much more to win this top prize during the Northern Ireland Year of Food and Drink to highlight the ground-breaking innovation that makes the food from these parts so special”.

To find out more about the awards, click here.