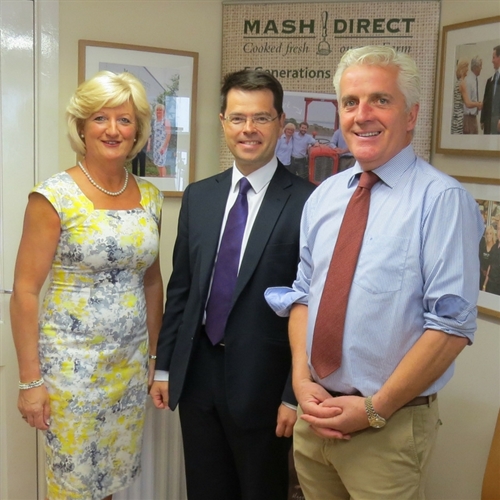 Martin Hamilton, Founder & Managing Director Mash Direct, said “We were delighted to welcome the Secretary of State for Northern Ireland James Brokenshire to Mash Direct. We have had a number of recent successes at Mash Direct including being named as one of the top Small and Medium Enterprises of the Year by The Grocer Gold Awards, Winning 2 Great Taste Awards 2016, Winning Best Chilled Food Manufacturer in the Food Awards NI and achieving a number of key UK listings for our products. It was extremely interesting to hear Mr Brokenshire's plans for Northern and a pleasure to give a tour around Mash Direct and tell the story of our success.”

Mr Brokenshire commented, "I have seen first-hand the dynamism, creativity and diversity of Northern Ireland's businesses and spoken about the UK government's priorities here - political stability, economic prosperity and keeping people safe and secure”. Mr Brokenshire said the UK was "a great and strong country with a bright future" and that Northern Ireland would have "a huge part to play" in that future.

We have also recently been visited by our new Prime Minister Theresa May, click here to read about her visit.